OMRON Automotive Electronics Co., Ltd., a subsidiary of OMRON Corporation  has announced a prototype non- contact pulse sensor that can measure heart rates with high accuracy inside vehicles, where measurements are difficult to perform.

The prototype bio-sensing technology is capable of detecting the driver’s pulse utilizing radio waves and OMRON ‘s proprietary algorithm. The device transmits radio waves towards the driver, and uses the returning radio waves to detect the deviance of approximately 100um that occurs in blood vessels as the heart beats. This deviance is then converted into a pulse signal, which OMRON ‘s unique algorithm then uses to calculate the heart rate. As the sensor does not require contact, it enables real-time monitoring of the driver’s health with no discomfort caused or impact on driving performance. 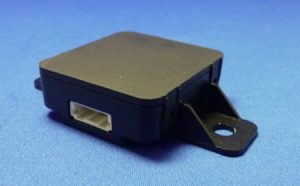 In recent years, there has been an increase in car accidents resulting from drivers falling asleep at the wheel due to fatigue, or due to the sudden onset of illness. In order to prevent such accidents, there is an increased need to monitor the health condition of drivers, and to detect abnormalities at an early stage. Non-contact sensors make this possible by estimating how sleepy the driver is based on the measured heart rate.

Using this non-contact sensor in conjunction with technologies such as the Cutting-Edge AI Onboard Sensor that measures the state of the driver in real time (announced June 6, 2016) and the Wearable Wrist Sensor that measures blood pressure continuously with each beat of the heart (announced April 18, 2016) to monitor both internal and external signs of the driver’s condition will allow abnormalities to be detected with even higher accuracy.

OMRON is aiming for the early commercialization of a system combining multiple sensing technologies that can reliably detect abnormalities and assess the risk of abnormalities before they occur. OMRON ‘s goal is to be the first to create an on board healthcare system capable of preventing accidents caused by factors relatable to the driver’s health, and to contribute towards a safe and comfortable motorized society.