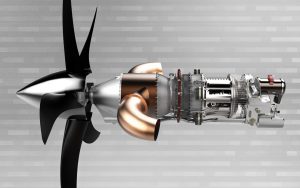 An additive CT7-2E1 technology demonstrator engine, dubbed the “a-CT7,” was designed, built and tested in 18 months, reducing more than 900 subtractive manufactured parts to 16 additive manufactured parts. The ATP engine architecture is derived from the CT7, allowing for part commonality between the two additive test programs.

The same team of eight engineers responsible for designing the CFM LEAP additive fuel nozzle tip led the design effort for the 16 additive parts tested in the a-CT7. GE is building more additive hardware for additional a-CT7 tests (which will include an even greater number of additive parts than the first a-CT7) in Lynn, Massachusetts. The additive components for a-CT7 and ATP tests are built at GE Aviation’s Additive Development Center (ADC) in Cincinnati, Ohio. GE expects to run its first full ATP engine test by the end of 2017.

Additive manufacturing allows GE to build parts at lower weight with better performance and durability. To learn how GE utilizes additive manufacturing to build parts, watch this YouTube video: https://www.youtube.com/watch?v=l0SXlkrmzyw “With subtractive manufactured parts and assemblies, you traditionally use bolts, welds or other interfaces to attach the parts together, which adds weight to the engine,” said Gordon Follin, ATP Engineering GM at GE Aviation. “On the ATP, additive reduces weight by eliminating those attaching features while also optimizing design of the parts.”

An additional benefit to the ATP is an expedited engine certification schedule. GE recently completed ATP combustor rig tests six months ahead of schedule due to the faster part production speeds allowed by additive manufacturing. For example, the combustor liners were printed in merely two days.

“A huge benefit of additive is expedited test schedules,” said Follin. “For a program like ATP, one of our big philosophical points of emphasis is getting hardware to test faster instead of spending too much time with models on a computer. By putting real hardware on test as quickly as we can, we can use the resultant data to help us design the next iteration for a better product, and we get that product much faster than if we were to use conventional manufacturing methods.”

The new 1,240SHP-rated ATP is the first entry in GE’s new family of turboprop engines aimed at Business and General Aviation aircraft in the 1,000-1,600 SHP range. The ATP features an industry-best 16:1 overall pressure ratio (OPR), enabling the engine to achieve as much as 20% lower fuel burn and 10% higher cruise power compared to competitor offerings in the same size class with 4000-6000-hour maintenance time between overhauls (MTBO) and class-leading performance retention.

GE (NYSE: GE) is the world’s Digital Industrial Company, transforming industry with software-defined machines and solutions that are connected, responsive and predictive. GE is organized around a global exchange of knowledge, the “GE Store,” through which each business shares and accesses the same technology, markets, structure and intellect. Each invention further fuels innovation and application across our industrial sectors. With people, services, technology and scale, GE delivers better outcomes for customers by speaking the language of industry. http://www.ge.com/

GE Aviation, an operating unit of GE (NYSE: GE), is a world-leading provider of jet, turboprop and turbo shaft engines, components and integrated systems for commercial, military, business and general aviation aircraft. GE Aviation has a global service network to support these offerings.