În a collaboration with researchers at the Massachusetts Institute of Technology (MIT), the Amsterdam Institute for Advanced Metropolitan Solutions (AMS Institute) has started the world’s first major research program on autonomous floating vessels in metropolitan areas. Roboat will be conducted by researchers from MIT, Delft University of Technology (TUD) and Wageningen University and Research (WUR). The five-year program has a budget of €25 million and is set in Amsterdam. 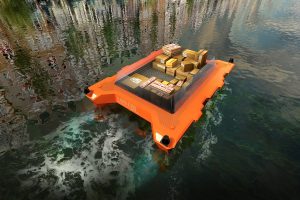 While the first prototypes of self-driving cars are taking to the road, Amsterdam ushers in a new chapter in the international push for autonomous vehicles. Roboat is the world’s first large-scale research that explores and tests the rich set of possibilities for autonomous systems on water. “Imagine a fleet of autonomous boats for the transportation of goods and people,” says Carlo Ratti, Professor at MIT and principal investigator in the Roboat-program, “but also think of dynamic and temporary floating infrastructure like on-demand bridges and stages, that can be assembled or disassembled in a matter of hours.” 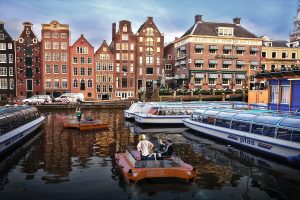 “Roboat offers enormous possibilities,” says Professor Arjan van Timmeren, AMS Institute’s Scientific Director, “as we’ll also be exploring environmental sensing. We could for instance do further research on underwater robots that can detect diseases at an early stage or use Roboats to rid the canals from floating waste and find a more efficient way to handle the 12,000 bicycles that end up in the city’s canals each year.”

The research, with a €25 million budget, is set in Amsterdam but aims to become a reference study for many urban areas around the globe. “It is a fantastic opportunity for Amsterdam,” says the city’s alderman and vice mayor Kajsa Ollongren. “To have the world’s most prominent scientists work on solutions with autonomous boats in this way is unprecedented, and most fitting for a city where water and technology have been linked for ages.”

The first prototypes of Roboat will be visible in the waters of Amsterdam in 2017.

Roboat is a research program by AMS Institute. Working on the project is a consortium of researchers from Massachusetts Institute of Technology, Delft University of Technology and Wageningen University and Research. Waternet, City of Amsterdam and City of Boston are supportive of the program.