As a leading player in district energy solutions, Danfoss presents know-how and future smart technologies at the Nordic Efficiency event in Paris. The solutions help increase energy efficiency in cities and the potential is huge.

Every day, more than half of the energy used for generating electricity vanishes into the air. This colossal energy waste has spurred the development of district heating and cooling systems that can utilize surplus energy to heat or cool people’s homes and to supply domestic hot water. 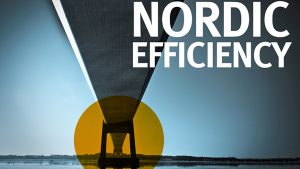 In Scandinavia, district energy systems that utilize surplus heat from power plants, waste incineration plants, excess heat from industry and other available sources have been widely used for decades to increase energy efficiency and bring down overall energy consumption. And now the next generation district energy systems emerge as an attractive solution not only in northern climates, but also in milder regions where the demand for cooling is growing as people seek improved indoor comfort.

Concepts and new technology for next generation district energy solutions were presented by Danfoss and other Scandinavian front runners at the Nordic Efficiency event in Paris from October 13 to 15. The event is part of the World Efficiency Conference warming up to COP21 in December.

– Today, only about 13 % of the heat demand in Europe is covered by district energy. When we consider that about 75 percent of the European population lives in dense urban areas ideally suited for district heating and cooling, the potential of increasing the use of district energy is huge. That is why we promote district energy as one of the most effective paths to live up to the energy efficiency target set up by EU Commission in the 2050 Energy Strategy, says Jan Eric Thorsen, who represents the Danfoss Heating Segment Application Centre.

One of the barriers to expanding district energy systems is the assumption that it is an expensive solution. Calculations have shown, however, that compared to traditional boiler solutions the price of the initial investment cost per consumer is highly competitive. Seen over the entire life cycle, the Scandinavian experiences show that district energy by far outperforms boilers, electric heating and other solutions in urban areas.

A lot of new opportunities for even higher district energy performance are emerging in next generation solutions.

– The potential of two-way systems looks very promising. This means that industries, supermarkets and other major energy consumers in the local communities become part of the district energy solution. They can pull out energy when they need it and then retrieve excess energy from their processes when available, creating an attractive win-win for utilities and private partners. At the same time we are developing smart control technologies that take into account weather forecasts and consumer behavior in order to get the most out of the available energy at any time. The future smart energy system is about flexibility across the energy carriers. Only when we master the inter-connection of the energy systems will we be able to harvest the synergies, says Jan Eric Thorsen.

– District energy systems comprise a network of pipes connecting the buildings in a neighborhood or a whole city. Citizens are served with water-borne heating/cooling from a centralized or decentralized system fueled by energy surplus from power production, waste incineration and industries – or by renewable energy sources of any kind – solar, biomass and geothermal heat.

– Next generation district energy systems operate at lower temperatures compared to previous systems, they interact with low-energy buildings and they are connected in smart systems with low grid losses.

– The next generation district heating systems and products are developed with high connectivity to be able to exchange data for optimum system operation, high efficiency of heat exchangers and increased user interaction.