A new kind of smart car

With things like Bluetooth, sensors, cameras and even satellite radio becoming commonplace in today’s modern car, our vehicles are already ultra connected. But what if cars themselves were connected to each other? That’s the idea behind technology referred to as vehicle-to-vehicle (V2V) and vehicle-to-infrastructure (V2I) communication.

The new technologies would enable cars to send drivers alerts for such things as a chain-reaction collision a few cars up the road, someone about to drive through a red light, braking vehicles ahead and vehicles in blind spots—real-time, anonymous, information about other cars and the environment around them. 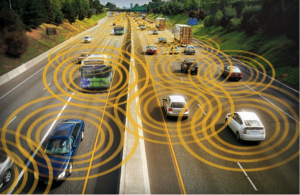 Last month, the U.S. Department of Transportation announced $42 million in federal money to pilot the next-generation technologies, specifically in three locations:  New York City, Wyoming and Tampa, Fl. Quoting U.S Transportation Secretary Anthony Fox from the DOT press release, “Through these types of smart investments, we are opening the door to a safer and cleaner network, and expanding how future generations will travel.”

According to the DOT, New York City will install V2V technology in 10,000 city-owned vehicles, including cars, buses and limousines that travel in Midtown Manhattan, as well as V2I technology – in traffic signals and road signs – also in parts of Midtown Manhattan as well as Brooklyn.  In Wyoming, the technology will be piloted in semi trucks that travel along Interstate 80. Tampa will receive $17 million of the funding to equip smartphones with the technology, alerting pedestrians of approaching vehicles at busy intersections.

Mike Shulman is the Technical Lead in Research for Connected Vehicles for automaker Ford, which is partnering with the DOT. (GM is also involved and has committed to using car-to-car communication in a 2017-model Cadillac.) Shulman calls it a cooperative effort. Says Shulman, “We’ve been working with the DOT and other auto makers since 2002 on vehicle to vehicle communication.  It’s about taking technology people are already so familiar with and essentially using GPS and WiFi so cars can be aware of each other. It’s like putting a really diligent passenger in the car next to you.” 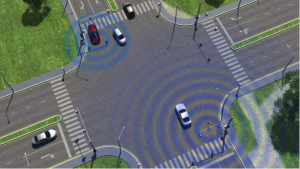 Already many cars have instruments that use radar or ultrasound to detect obstacles or vehicles. But the range of these sensors is limited to a few car lengths, and they cannot see past the nearest obstruction.

Shulman says communication alerts would go over 802.11p, a modified version of WiFi. He stresses this is not the same WiFi used for email and calls but an entirely separate frequency for high availability and low latency. He says driver alerts would be as quick and intuitive as possible, using things like lights and audio to warn of pending dangers. Shuman says on board computers in vehicles would process various readings being broadcast by other vehicles 10 times every second, each time calculating the chance of an impending collision.

No other technology in the last 50 years has been as compelling for car safety as V2V technology. The last one as revolutionary as this was seatbelts.

John Maddox, University of Michigan’s Transportation Research Institute
John Maddox is Assistant Director at the Mobility Transformation Center at the University of Michigan’s Transportation Research Institute. Says Maddox, “No other technology in the last 50 years has been as compelling for safety as V2V technology. The last one as revolutionary as this was seatbelts.”

Recently, the NHTSA, or the National Highway Traffic Safety Administration, and the University of Michigan equipped nearly 3,000 cars with experimental transmitters. After studying communication records for those vehicles, NHTSA researchers concluded that the technology could prevent more than half a million accidents and more than a thousand fatalities in the U.S. every year, while also reducing the number of hours Americans spend in traffic.

Maddox says it comes down to milliseconds when things can go wrong on the road.

He adds it takes even less time to harm what he calls “vulnerable road users” which are motorcyclists, bicyclists and pedestrians. “So we’re extremely keen at looking at communication technologies to help prevent these type of accidents. He says technologies the Institute is testing right now include V2P (pedestrian), V2M (motorcycle) and V2B (bicycle).

How soon could we see this in our cars?

Ford’s Shulman explains that the NHTSA will submit draft regulation next year requiring every new car be equipped with dedicated short-range communication (or modified WiFi). He says a final ruling could come as early as 2018 and that the public could see all new cars equipped with the technologies by 2020.

Please credit us with the following information: Used with the permission of http://thenetwork.cisco.com/.