The growing digitization and networking process within our society has a large influence on all aspects of everyday life. Large amounts of data are being produced permanently, and when they are analyzed and interlinked they have the potential to create new knowledge and intelligent solutions for both the economy and society as a whole. To facilitate the use of Big Data technologies, the European Union funds an interdisciplinary research and innovation project called “BigDataEurope”. 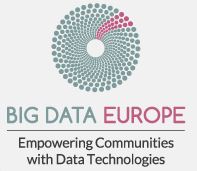 A European consortium, led by the Fraunhofer Institute for Intelligent Analysis and Information Systems IAIS, is developing a platform that will simplify the creation and access to Big Data applications and their integration into existing workflows. Health, Food, Energy, Transport, Climate, Social Sciences and Security – these are the most important societal challenges tackled by the European Union within the new research and innovation framework program “Horizon 2020”. In every one of these fields, the processing of large amounts of data plays a growing role – such as the analysis of medical data, the decentralized supply with renewable energies, or the optimization of traffic flow in large cities. Big Data technologies make important contributions to economic and societal advances Although many crucial Big Data technologies are freely available as open source software, they are often difficult to integrate and deploy, in particular for stakeholders from the previously-mentioned societal challenge domains. In many cases this has practical reasons: available tools cannot always be readily adapted to a particular problem or their integration into everyday workflows would be too complex or expensive. To raise awareness of the importance and to push the use of data technologies, twelve European partners, led by Fraunhofer IAIS, Germany, are creating a platform which integrates crucial Big Data technologies tailored to the needs of stakeholders in Health, Food, Energy, Transport, Climate, Social Sciences and Security. “With this platform, we will provide companies and institutions an integrated and readyto-use palette of Big Data tools that is adapted to their particular needs,” Prof. Dr. Sören Auer, project coordinator at Fraunhofer IAIS, explains. “Small and medium-sized companies – who often do not have the resources for large implementation projects or for hiring a team of specialized data scientists – will especially benefit from the lowered entrance barrier into the Big Data world as we offer them the opportunity to easily understand and use state-of-the-art data science techniques for their businesses.” BigDataEurope will guide the development and implementation of a big data platform The project tackles two key aspects. First, BigDataEurope will build up a network between stakeholders of the key European societal sectors. Interest groups modelled after the W3C scheme will then be launched to discuss the particular needs of each sector in a series of workshops that will cover the whole process of data usage; from data collection, processing, storage and visualization to the development of data services. The second aspect of the project will see that the requirements collected in the workshops are used to guide the technical development and implementation of the open BigDataEurope Platform. BigDataEurope is being launched on 27 February 2015 in Brussels To mark the launch of the project, all BigDataEurope partners invite interested stakeholders as well as journalists to participate in the public launch event, to be held on the 27th of February 2015, in Brussels, Belgium.