Every day, millions of hours are wasted on the road worldwide. Last year, the average San Francisco resident spent 230 hours commuting between work and home1—that’s half a million hours of productivity lost every single day. In Los Angeles and Sydney, residents spend seven1 whole working weeks each year commuting, two of which are wasted unproductively stuck in gridlock2. In many global megacities, the problem is more severe: the average commute in Mumbai3 exceeds a staggering 90 minutes.  For all of us, that’s less time with family, less time at work growing our economies, more money spent on fuel—and a marked increase in our stress levels: a study in the American Journal of Preventative Medicine , for example, found that those who commute more than 10 miles were at increased odds of elevated blood pressure4. 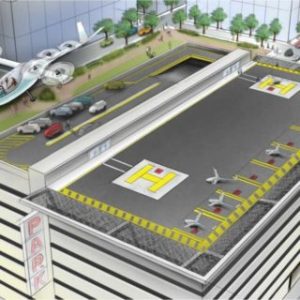 On – demand aviation , has the potential to radically improve urban mobility, giving people back time lost in their daily commutes. Uber is close to the commute pain that citizens in cities around the world feel. We view helping to solve this problem as core to our mission and our commitment to our rider base. Just as skyscrapers allowed cities to use limited land more efficiently, urban air transportation will use three-dimensional airspace to alleviate transportation congestion on the ground. A network of small, electric aircraft that take off and land vertically (called VTOL aircraft for Vertical Take – off and Landing , and pronounced vee – tol ), will enable rapid, reliable transportation between suburbs and cities and, ultimately, within cities.

The development of infrastructure to support an urban VTOL network will likely have significant cost advantages over heavy-infrastructure approaches such as roads, rail, bridges and tunnels. It has been proposed that the repurposed tops of parking garages, existing helipads, and even unused land surrounding highway interchanges could form the basis of an extensive, distributed network of “vertiports” (VTOL hubs with multiple takeoff and landing pads, as well as charging infrastructure) or single-aircraft “vertistops” (a single VTOL pad with minimal infrastructure). As costs for traditional infrastructure options continue to increase5, the lower cost and increased flexibility provided by these new approaches may provide compelling options for cities and states around the world. 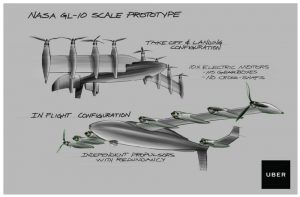 Furthermore, VTOLs do not need to follow fixed routes. Trains, buses, and cars all funnel people from A to B along a limited number of dedicated routes, exposing travelers to serious delays in the event of a single interruption. VTOLs, by contrast, can travel toward their destination independently of any specific path, making route-based congestion less prevalent. Average one-way commute time of 27.6 minutes in SF zip code 94109, 33.0 in LA zip code 90017 (https://project.wnyc.org/commute-times-us/embed.html#12.00/37.7964/-122.4222), 35 in Sydney (https://www.allianz.com.au/car-insurance/news/the-daily-battle-metropolitan-commutes). 50 work weeks per year 2 Time only stuck in traffic congestion (http://inrix.com/scorecard/), does not include all in-car time 3 Times of India 4 Cooper Center Longitudinal Study, 2012. https://www.ncbi.nlm.nih.gov/pmc/articles/PMC3360418/ 5 For example, the UK’s proposed High Speed 2 railway would cost taxpayers £27B ($33B) over nine years for a single straight-line route between London and Birmingham—that’s nearly $280M/mile, a projection that continues to increase. See http://www.bbc.com/news/business-36376837. This is just one example project; our point is that new technology can create options for transportation infrastructure that are far lower cost. 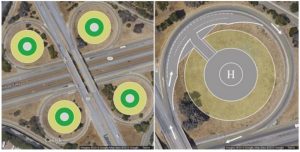 Recently, technology advances have made it practical to build this new class of VTOL aircraft. Over a dozen companies, with as many different design approaches, are passionately working to make VTOLs a reality. The closest equivalent technology in use today is the helicopter, but helicopters are too noisy, inefficient, polluting, and expensive for mass-scale use. VTOL aircraft will make use of electric propulsion so they have zero operational emissions6 and will likely be quiet enough to operate in cities without disturbing the neighbors. At flying altitude, noise from advanced electric vehicles will be barely audible. Even during take-off and landing, the noise will be comparable to existing background noise. These VTOL designs will also be markedly safer than today’s helicopters because VTOLs will not need to be dependent on any single part to stay airborne and will ultimately use autonomy technology to significantly reduce operator error.

We expect that daily long-distance commutes in heavily congested urban and suburban areas and routes under-served by existing infrastructure will be the first use cases for urban VTOLs. This is due to two factors. First, the amount of time and money saved increases with the trip length, so VTOLs will have greatest appeal for those traveling longer distances and durations. Second, even though building a high density of landing site infrastructure in urban cores (e.g. on rooftops and parking structures) will take some time, a small number of vertiports could absorb a large share of demand from long-distance commuters since the “last mile” ground transportation component will be small relative to the much longer commute distance.

We also believe that in the long-term, VTOLs will be an affordable form of daily transportation for the masses, even less expensive than owning a car. Normally, people think of flying as an expensive and infrequent form of travel, but that is largely due to the low production volume manufacturing of today’s aircraft7. Even though small aircraft and helicopters are of similar size, weight, and complexity to a car, they cost about 20 times more8.

Ultimately, if VTOLs can serve the on-demand urban transit case well—quiet, fast, clean, efficient, and safe—there is a path to high production volume manufacturing (at least thousands of a specific model type built per year) which will enable VTOLs to achieve a dramatically lower per-vehicle cost. The economics of manufacturing VTOLs will become more akin to automobiles than aircraft. Initially, of course, VTOL vehicles are likely to be very expensive, but because the ridesharing model amortizes the vehicle cost efficiently over paid trips, the high cost should not end up being prohibitive to g e t t i n g s t a r t e d . And once the “Operational emissions” refers to the emissions from the vehicle during operation, which is only a portion of the full life-cycle emissions. There is great value in achieving zero operational emissions: see the Vehicle: Emissions section for a deeper discussion on this topic. 7 High-volume production of aircraft was was achieved during World War II and for a few years afterward. Also during the 1970’s General Aviation sales reached ~20,000 units/year, but since the early 1980’s have experienced sales of only a few thousand units per year. 8 Not only are aircraft and helicopters dramatically more expensive than cars, but also the components going into the vehicles. The 430-horsepower Corvette LS3 6.2 liter crate complete engine has a MSRP of  $7911 from GM (http://www.chevrolet.com/performance/crate-engines/ls3.html) yet is far more complex than an aircraft engine, such as the Continental IO-550C 300 hp engine which has a MSRP of $46,585 (http://www.continentalmotors.aero/Engine_Details/Stock_Engines/ ).

The vision portrayed above is ambitious, but we believe it is achievable in the coming decade if all the key actors in the VTOL ecosystem—regulators, vehicle designers, communities, cities, and network operators—collaborate effectively. The following are what we perceive as the most critical challenges to address in order to bring on-demand urban air transportation to market.