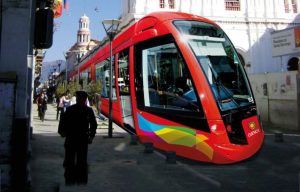 Indra, the number one multinational and consulting company in Spain and one of the most important in Europe and Latin America, has been awarded a contract for the engineering, supply and implementation of systems of street signposting and tram priority, access control and ticketing for the new tram in Cuenca, the third-largest city in Ecuador. The Cuenca tram is currently under construction and is expected to begin operating in June 2016. It will be used by around 120,000 passengers a day, or 39 million a year. It will be the largest mass transport system in the city, which is considered “the Athens of Ecuador” thanks to its architectural and artistic heritage. The road and tram signposting systems to be implemented by Indra will allow the management of mobility in the areas the tram passes through, and other nearby areas that may be affected by its passage. Indra will upgrade the current technology in the urban traffic control center in Cuenca and implement new software that will enable the integrated management and control of traffic in the area, and its optimization. In addition, thanks to a traffic-light priority system that will be integrated with the rest of the Cuenca tram subsystems, the signposting will favor the circulation of the tram over private vehicles, thereby guaranteeing the timetable established for the service and encouraging citizens to opt for public transport in line with the planning goals of the municipal government. The aim is to incorporate the transport mode into the Integrated Mobility System, reduce the current levels of traffic and greenhouse gas emissions, and optimize mobility throughout the historic center – which in 1999 was declared a World Heritage Site by the UNESCO–, promoting the use of the tram and discouraging private traffic. Indra’s smart technology for the improvement of mobility management will help Cuenca to take further steps towards its goal of becoming a smart city, as has occurred in other projects carried out by Indra, for example in Medellín.

Contactless technology Indra will also install its latest-generation contactless ticketing system in the Cuenca tram to enhance the service and information provided to passengers and streamline the control, financial management and tracking of resources. Travelers can top up their contactless cards in automatic ticketing machines to be installed at all the 28 stops along the route, then validate them in the access control systems. Public assistance and customization points will be set up in several cities to include the holders’ details and photo on the card along with their user profile. The solution will also include portable sales and inspection equipment, which will allow card top-ups and sales and the inspection of both contactless cards and one-way tickets intended for occasional travelers. The application of technology to public transport brings improvements to the service and promote its use by the citizens, a fundamental aspect particularly in the urban setting to respond to the need for more efficient, ecological and sustainable transport and mobility.

Cutting-edge transport technology This contract in one of Ecuador’s most important cities reinforces Indra’s position as one of the world’s leading companies in smart technology applied to urban mobility, with projects in cities like London, Madrid, Dublin, Medellín, Curitiba, Kuwait and Manila, among others. With this technology, cities can advance toward the smart city model and achieve more efficient and sustainable mobility by reducing traffic jams and their costs, minimizing carbon emissions and promoting the use of public transport. Indra’s ticketing technology has been implemented all over the world in subways in Madrid, Barcelona, Valencia, Lisbon, Calcutta and Shanghai, the suburban railroad in Mexico City, Santiago de Chile, the commuter train in Austin and the light rail in St. Louis in the US. In the field of public passenger transportation management, the company’s operation assistance solution (OAS) manages over 14,500 buses worldwide through projects in Brazil, Colombia, Mexico, Argentina, Poland, Morocco, Portugal and Spain. This year the company has been awarded the world’s largest ticketing contract to implement all the ticketing and access control systems for the new public transportation system being developed in Riyadh, Saudi Arabia, with six subway lines and a fleet of 1,000 buses.