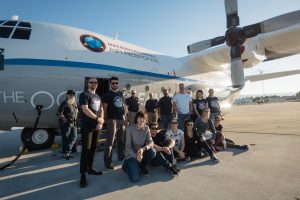 MOFFETT AIRFIELD – MOUNTAIN VIEW (CA), October 3, 2016 – The Ocean Cleanup, the Dutch foundation developing advanced technologies to rid the oceans of plastic, today presented the initial findings of its Aerial Expedition – a series of low-speed, low-altitude flights across the Great Pacific Garbage Patch, the plastic accumulation zone between Hawaii and California. Using a modified C-130 Hercules aircraft, expert spotters, and an experimental array of plastic scanning equipment, the expedition aims to accurately measure the biggest and most harmful debris in the ocean. This is an essential milestone in preparation for the cleanup of the patch, scheduled to begin before the end of the decade.

This first-ever aerial survey of floating ocean plastic provided confirmation of the abundance of plastic debris sized 0.5 m/1.5’ and up. While the flight plan took us along the Northern boundary ofthe patch, more debris was recorded than what is expected to be found in the heart of theaccumulation zone. Initial estimates of the experienced observer crew indicate that in a span of 2.5hours, over a thousand items were counted.

For the development of a cleanup technology, it is essential to understand the problem, specifically the dimensions of the individual objects and the plastic accumulation as a whole. The nature and amount of the debris determine the design of cleanup systems, the logistics of hauling plastic back to shore, the methods for recycling plastic, and the costs of the cleanup. 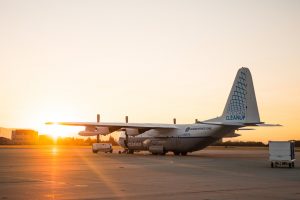 The quest to answer this question started in August 2015, when The Ocean Cleanup’s fleet of about 30 vessels crossed the patch simultaneously in an operation named the Mega Expedition. On their crossing wide range of debris sizes were sampled, producing the first high-resolution map of the patch. By using sampling nets that were 80x larger than conventional scientific measurement tools, it was discovered that the amount of large debris was heavily underestimated.

The Mega Expedition successfully measured plastic up to 0.5m/1.5’ in size, but there were signs of a significant mass of plastic even larger than that. This includes “ghost nets” – discarded fishing nets many meters in diameter, which are notorious for ensnaring sea life and ship propellers. To accurately quantify those and other very large debris, a much larger area must be covered, which lead to the launch of the Aerial Expedition. For every 5 minutes of flight the same ocean surface area is scanned that was covered by the entire Mega Expedition in 2015. This increase in survey area enables the quantification of the largest pieces of trash in the ocean, resolving the last piece of this puzzle.

Once all exploration flights are finalized later this week, the results from the Aerial Expedition will be combined with the data collected during the 2015 Mega Expedition in a peer-reviewed scientific paper
expected to be published early 2017.

Thanks to research partners including Teledyne Optech, NOARC (National Oceans and Applications Research Center) and ITRES, The Ocean Cleanup has access to the world’s most advanced apparatus to detect the plastic, including LIDAR and Multispectral camera technology.

Michel Stanier, General Manager of Teledyne Optech Inc., said: “We are proud to leverage Teledyne Optech’s 40-plus years of lidar and software experience, as well as advanced lidar systems like our Optech CZMIL Nova Coastal Zone Mapping and Imaging Lidar, to The Ocean Cleanup’s Aerial Expedition. Through a combination of our sensor technology and human observer data, we are helping to achieve the first detailed data map of plastic in the Great Pacific Garbage Patch.”

Boyan Slat, CEO and founder of The Ocean Cleanup: “The Aerial Expedition – our final reconnaissance mission – brings us another step closer to the cleanup of the Great Pacific Garbage Patch. The initial findings of the expeditions again underline the urgency to tackle the growing accumulation of plastic in the world’s oceans.”