The augmented reality – just a game?

The augmented reality appeared to be relegated to the shadows until just a few months ago. But thanks to the Pokemon Go smartphone app, virtual reality is suddenly on everyone’s radar.

Catching little creatures using virtual balls may not seem like the best or most clever way to use this technology – but it certainly is profitable: Creator Nintendo earns some USD 200 with the app – every second! 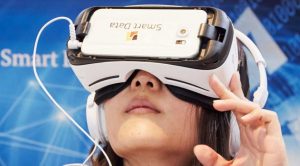 Around ten years ago, virtual reality earned another company its 15 minutes of fame: Linden Labs briefly caught the attention of users, brands and companies with its virtual world “Second Life” – until it fell back out of vogue a short time later. So does virtual reality always just create one-hit wonders? By no means, says the Eco internet association. The application and market potential of augmented reality is in fact widely underrated. “Enriching perceptions of the real world with additional information will reveal itself as a megatrend,” predicts Dr. Bettina Horster , Director of Mobile for Eco. “With Industry 4.0, augmented reality is entering industrial manufacturing.”

Various research institutes, including Fraunhofer IFF , VRVis and TU München have developed innovative solutions in fields including medicine, mechanical engineering and IT. The Elbedom , for example, is a mixed reality laboratory in which large objects such as machines, systems, factories or entire cities can be visualized on a 1:1 scale. This allows several users at once to design system and factory layouts or plan cities, without needing to wear special headsets or other equipment. Instead, laser projectors create the interface between reality and the virtual world.

A question of attitude

The borders between augmented reality, mixed reality and substitutional reality are becoming increasingly fluid. In simple terms, all these terms describe the same thing: the integration of computer-generated data models into our perception. The differences lie in their approach. Mixed reality describes the combination of real and virtual worlds, such as when real people appear in virtual environments.

Augmented reality turns the tables: Virtual information, animations or graphics are displayed against real scenes – like in Pokemon Go. Substitutional reality involves real elements introduced into virtual scenes. Here the illusion is perfect for the user, who in the best cases can no longer distinguish between the real and virtual worlds.

For industry, the rapid development of these technologies and above all their underlying data capture methodologies, i.e. cameras, offer nearly endless possibilities. A number of application areas have been established across business sectors, in education, planning and presentations. Particularly when it comes to replicating very expensive, difficult to access or dangerous environments, virtual reality is often a more cost effective option – whether for an Airbus cockpit, an oil rig, a power plant or an operating room. Augmented reality, where real perceptions are combined with virtual data, is still at its beginnings here.

Bosch Rexroth’s “Insight Live” solution, for example, promises a profitable combination of virtual and real perceptions. The system is utilized by drive manufacturer Hägglunds, whose products are in use worldwide. If a customer has a problem with a drive system, their technicians can now contact Hägglunds support directly from the site, and the product expert can watch everything happening live via the tablet camera. This specialist can also introduce their hands, tools, documents or diagrams into the technicians’ display, who can immediately see what must be done with the machine, and carry out diagnosis and repairs.

Augmented reality will play an important role in the future in logistics as well as manufacturing. Instead of working in different media, as has been done until now – on paper using a scanner, for example – headsets now combine surroundings with electronic information. “The forklift operator literally sees right before their eyes, what they have to get from where, and where they need to drive,” says Dr. Bettina Horster of the Eco association. Vision Picking is the name given by DHL to a project that lets warehouse workers do completely without lists and tools. Relevant information is displayed in the user’s field of vision, such as storage location and position on the order picking truck. The employee registers barcodes and QR codes using the scanner integrated into the headset.

However, very real challenges still stand in the way of large-scale implementation of virtual technologies: short battery lives, high investment costs and insufficient network availability, to name just a few. These are exactly the same problems that caused not a few Pokemon Go players to give up on the game.