As a global automotive and industrial supplier, Schaeffler is digitally transforming its entire business, which involves the integration of its mechatronics components, systems and machines into the rapidly expanding world of the ‘Internet of Things’. Through its Machine Tool 4.0 project, Schaeffler wants to prove that Industry 4.0 is not an abstract, remote vision, but can make a contribution to added-value today.
The digital networking of production facilities along the entire value chain is one of the most important goals of Industry 4.0. Schaeffler sees itself not only as a supplier for smart factories, but also implements new technologies at an early stage in its own volume production. The goal of being able to respond more quickly and flexibly to current developments in a rapidly changing world is a key motivation for Schaeffler to digitise its processes in all areas. In the future, the company will therefore digitally map the entire product lifecycle, from the initial concept to a new product, and from digital production planning to sales management.
Schaeffler’s components such as bearings and linear guidance systems are used in critical areas of machines, which produce critical information about conditions and movements. In recent years, Schaeffler has invested heavily in research and development and has incorporated sensors, actuators and control units with embedded software into these products. With this, it is now possible for these parts to collect and process valuable data on the condition of a machine and then convert this data into added-value services.

As a leading supplier and development partner for machine tool drive components, Schaeffler is pursuing a specific digitalisation strategy, with the aim of providing data from a diverse range of processes using sensors, networking and analyses in order to offer its customers real added value.
At its plant in Hoechstadt, Germany, Schaeffler has put a machine tool into operation that demonstrates how Industry 4.0 actually works in practice. Equipped with several dozen new and additional sensors, the milling machine, which was developed in close collaboration with leading machine tool maker DMG MORI, collects large volumes of data that can be evaluated in the Cloud.
During production, the machine records more data than usual; it is the prototype of a machine tool in the IoT. The machine is not used in a research laboratory but in the ongoing volume production of high precision bearings. This means rolling bearings that are, in turn, used in machine tools. The diameter and roundness must comply with the target specifications to approximately two microns. With this project, Schaeffler wants to demonstrate that Industry 4.0 is not an abstract, remote vision but can make a contribution to added-value today. 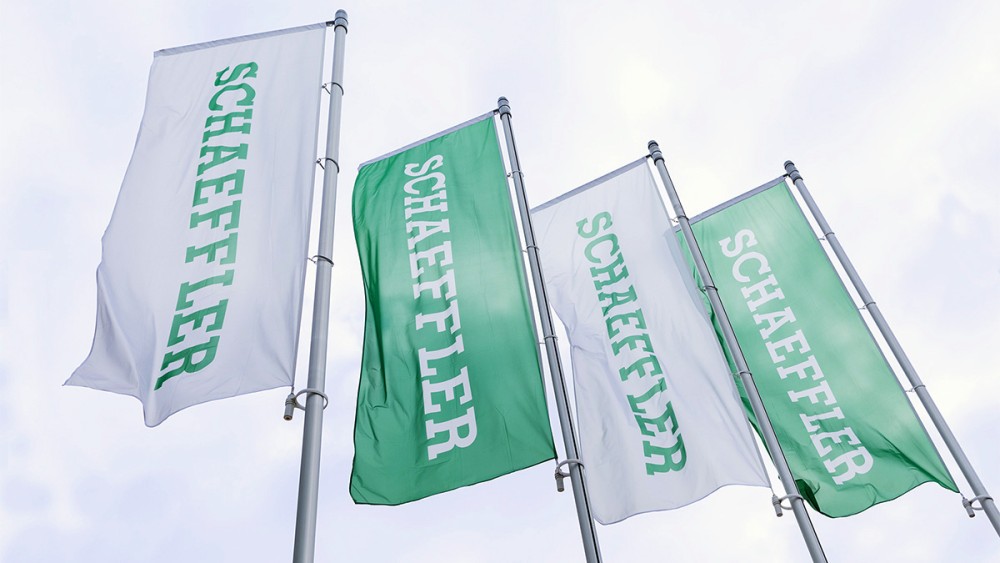 “In more than 60 different positions, the machine is equipped with sensors that record measurement values for pressures, vibrations and forces. These are primarily integrated in components that Schaeffler already supplies, such as in spindle bearings and linear guidance systems. These components are positioned precisely where things move on the machine.”

“The machine tool’s condition is effectively transparent at any time. Every day, production processes become more efficient and easier to plan. The machine operator can schedule bearing replacement, which avoids unplanned machine downtimes,” he adds.

Valuable data is generated at these measuring points, which is saved not only in the machine itself but also in pre-analysed form in the Schaeffler Cloud. Communication with central servers takes place via a secure gateway. The condition of individual components on the machine tool can be viewed at any time, either using the operating terminal on the machine or using a device connected to the Internet, such as a tablet or smartphone.

In order to clearly categorise the measured data, each component manufactured on the new machine receives its own ID by applying a unique Data Matrix Code. All data generated during milling or in the subsequent machining processes can therefore be assigned later to a specific component. By comparing the data for the individual components, Schaeffler will be able to quickly recognise deviations, correct these, and in turn continuously optimise the manufacturing processes. The possibilities are huge, ranging from even higher precision in soft machining, to reducing energy consumption and lubricant supply.

“Recording the load data, particularly for the main spindle, the linear guidance and the TCP [tool centre point] allows potential overloads to be made transparent. This is beneficial to both the machine manufacturer and the operator. The user interface is the central interface here, providing the user with precise data about the current status of the production process. Determining the forces allows us to further optimise the load conditions in the machine.”

To set and inspect the precise machine load is a very complex task. The operating panel at the new machine tool allows the correct main spindle operating load to be set and the current loads can be monitored whenever this is needed. If the load limit is exceeded, an active warning occurs and the load can be adjusted immediately. This also covers vibrations on the machine components. Moreover, the effects of temperature fluctuations on the forces can be checked by using the operating panel. 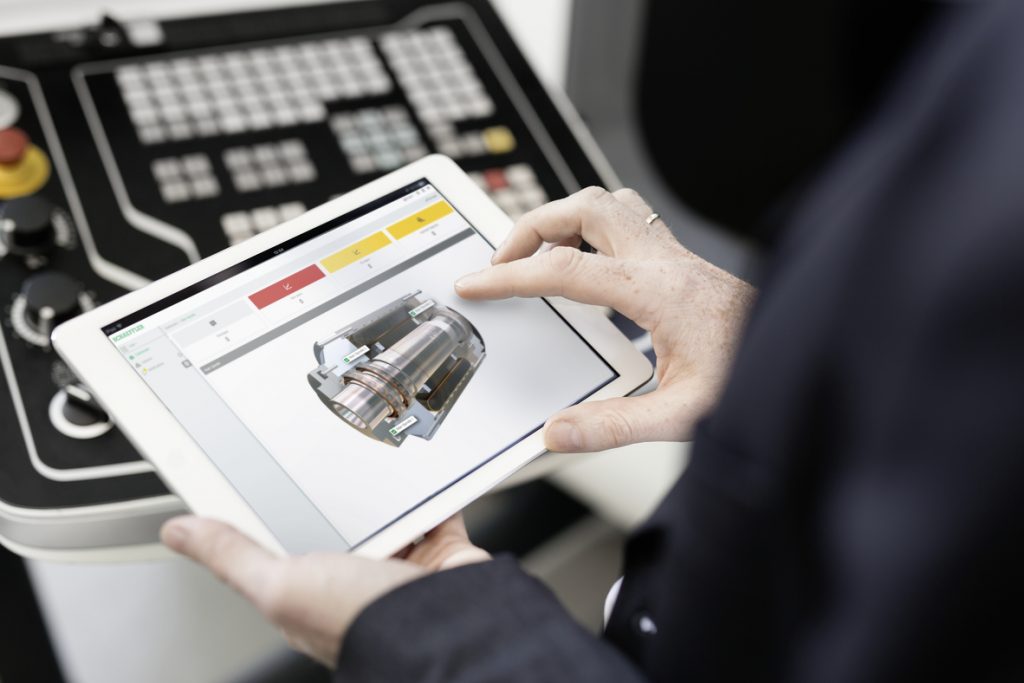 Demand-based lubrication on the machine also ensures that resources are saved, while also safeguarding the bearings’ functionality and thus the performance of the machine. The sensors in the machine send signals that allow, among other things, analysis of the condition of the lubrication film at critical points in the machine. If the condition is no longer sufficient, a signal will be sent to the Schaeffler CONCEPT8 and the required quantity of fresh grease is delivered to the bearing position. Machine downtimes caused by insufficient lubrication can therefore be eliminated. Furthermore, the CONCEPT8 reports on the remaining quantity of grease in the cartridge. Usually the grease cartridge filling levels had to be checked directly on the machine. Now it can be controlled digitally on mobile devices.

The pilot project in Hoechstadt hopes to demonstrate how significant the productivity gains are through the improved use of data. What is important is that the project uses a real production process, which means Schaeffler can identify how Industry 4.0 works in practice, where the challenges lie, and how added value can be generated. Ultimately, it is hoped that Schaeffler will benefit from the pilot project in two ways. First, the company can present itself to the manufacturers of machine tools as a solutions provider for Industry 4.0, while also using the knowledge within its own production processes.

“Digitalisation allows us to take the next step towards Machine Tool 4.0, allowing all process and quality data for manufactured parts to be traced. In the future, data analyses will even make it possible to predict quality results. In other words, machine operators can proactively influence the manufacturing process. “